She’s the exception to his every rule…

FBI agent Max Carter lives his life by a strict set of rules—rules that don’t allow for distraction, deviation…or a relationship. But tell that to his matchmaking mama. To avoid yet another set-up, he announces he has a girlfriend. And now has to produce said girlfriend at Christmas dinner. Maybe Santa has a suitable actress in that red bag of his…

Gina Castillo is about to break her building’s iron-clad “no pets” policy to give her little brother the perfect Christmas gift—a dog. Too bad Max, the most inconveniently sexy tenant in the building, catches her red handed. Gina expects to be evicted, but instead finds herself blackmailed into playing the role of his girlfriend.

Two lies plus one dog should equal a hot mess of a holiday, but attraction and Christmas magic might just defy the rules…

BOOKS IN THIS SERIES 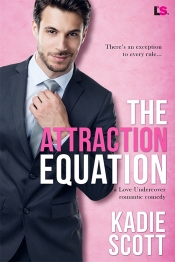 ✭✭✭✭✭ “Get ready to ring in the Holidays with peels of laughter, sweet moments of love and madcap puppy chases, all while watching one sedate and “ordered” man have his world reorganized by the chaos of love!” ~Tome Tender

✭✭✭✭✭ “This novel is smart, funny, and sexy. It’s positively delicious to read and I already can’t wait for the authors’ next book.” ~Linda Quick, Goodreads Reviewer

✭✭✭✭✭ “All the things that made The Wrong Kind of Compatible work are here.  The humour.  The sarcastic comebacks.  The three dimensional characters…. The reader is gifted with a real gem of a story.” ~A British Bookworm’s Blog

✭✭✭✭✭ “This book is funny, sweet and hot as hell.  I can’t wait to see if Kadie puts out another book in this series.  I am so hooked.” ~Moonshine’s Corner

✭✭✭✭✭  “I can’t help it guys and gals, I love, love, LOVED this book! Let me put it to you this way, I absolutely hate New York City (psychotic, I know), and yet if it were in any way possible I would want to live in this world, and have a glass of wine with all of the characters.” ~Romance Novels for the Beach

Max increased the speed on is treadmill, determined to outrun his demons. Namely, a brunette with big doe eyes and a huge heart who’d managed to wind herself into his life and into his very blood.

The door creaked, and he scowled. No one ever disturbed his middle of the night workout, and tonight he was in no fucking mood to share the space, that was for damn sure.

The air punched out of his lungs as recognition of his intruder’s identity slammed through him. Gina slipped into the room, sexy as hell. When did she ever not look sexy, even in that ridiculous elf costume? Now she wore a white tank top and black booty shorts that clung to the curve of her gorgeous backside. An outfit more suitable for sleeping than exercise—one he could image peeling her out of in the middle of the night—but he couldn’t even peel his eyes from her right now.

Without a word, and by some miracle still running without falling on his butt, Max watched her, never breaking eye contact. Leaning back against the door, her hands behind her, she stared back. He caught the soft snick of the lock even over the constant whirring of his machine. Max gulped as the blood abandoned his brain, leaving his legs lethargic as he continued to run.

Was this his thank-you gift for organizing her tools and things? Hell, yeah!

Turning away, she pulled the blinds covering windows facing the hallway closed, giving him a fantastic view of her from behind. Then she turned and walked toward him, hips swaying hypnotically. Max was about to explode in anticipation of whatever she had in mind.

For once in his life, he didn’t give two shits about the rules.

But, instead of stripping off her clothes like he was picturing, she reached over and yanked on the emergency chord, bringing his machine to a stop.

“Would you like to explain why you touched my things?” she demanded.

Her eyes glittered with anger, lips pressed together. How had he missed that?

Max had no clue what to do with what was happening. She was here to yell at him in the middle of the night?