Give yourself something to look forward to after the holiday insanity is over! Pre-order SAVING THE SHERIFF now!!!

A storm is brewin’…

The day his wife died, Sheriff Cash Hill discovered she was leaving him for another man, one she’d loved since before their marriage. How could the single dad ever trust another woman again? But when Georgia’s best friend, Holly, comes back to town, something about Holly’s sweet, sassy vulnerability has his protective instincts kicking in hard.

Holly Jensen left La Colina, Texas with regrets. She’s returned home to work as the new large animal vet and to watch over her best friend’s daughter. But Holly’s knowledge of Georgia’s past could rip a family apart. And she’s reluctant to go to the sexy…and single…sheriff, as he’s made it clear he wants nothing to do with her.

Both are faced with a choice…stay locked in the past or allow their reservations to be silenced by a passion hotter than Texas summer nights. Can they learn to trust their own hearts and each other?

✭✭✭✭✭ “This is one of those feel good books that you can’s put down because you want to see what is going to happen next because both Cash and Holly are both set in their ways and can’t see what is right in front of them and you really want them to get things right so you keep reading because the book is just that good. This is a great start to a series and I can’t wait to see what happens to the rest of the Hill clan.” ~Sarah, Goodreads Reader 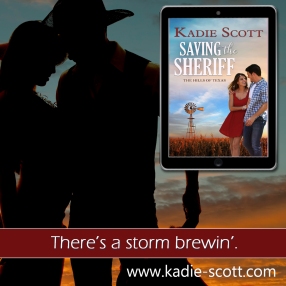 Gear loaded, she walked into the barn, breathing in the familiar scents of hay and horse and leather, and took some time to shake it off. She walked along the stalls, patting the velvety noses of the animals.

Yes, all her training, and a lot of time spent dissecting and practicing on animal cadavers, had given her a certain amount of distance from any emotions related to her job, but that didn’t make her a robot. Besides, these days it was more about the distress of their owners.

Most cowboys had seen too many dead animals to care anymore. Heck, they raised them for slaughter, much of the time, so they couldn’t let themselves get attached or emotional. Will was a rancher. He’d seen this before. But she knew with this kind of stock he’d likely put his heart and soul into his horses, so losing one was hard. Holly felt for him, but she’d found that owners needed their vets to be a rock—professional, efficient and only borderline sympathetic. She could do that. In fact, she was good at it, but she often needed time alone afterward to let it all go.

She stopped and scrunched up her face at Cash’s voice. Couldn’t a girl just get a second by herself?

Apparently, she hadn’t been very successful at hiding the evidence of her irritation because he frowned down at her as soon as she swung around.

“You okay?” he asked in a gruff voice. The question didn’t quite match the rather stoic look he gave her, as though he was irritated with himself for asking the question.

She gave a deceptively sunny smile. “Fine as a fiddle.”

After a beat of silence, he glanced around with raised eyebrows. “Why are you in here?”

“Curiosity got the better of me. I was checking out Will’s stock.”

He crossed her arms and gave her an assessing look from those clear blue eyes. She could just imagine that look on his face when he was interrogating a suspect. “I’m sure Will would be happy to show you.”

“Right.” She moved with purpose toward the door leading outside, intending to go up to the house, but stopped as she got up close to Cash and realized he wasn’t moving.

Tipping her head back, Holly raised her eyebrows. “Something else?”

“Is it hard? Putting them down?”

How had he guessed? Holly stared at him for a brief moment, part of her reluctant to admit, even to herself, this was the hardest part of her job, and part of her strangely drawn to sharing something so personal with Cash.

“Not really.” She shrugged.

He didn’t respond, nor did he move to let her by. Gently, he reached out and tucked an errant strand of hair behind her ear. “Don’t let yourself get too callous about it.”

Holly held her breath at the shock of his touch and the resulting sensation his action caused. Electric was the description that came to mind. “No?” She was proud of how steady her voice sounded.

His eyes dropped to her lips. Slowly, he shook his head. “Uh-uh. ’Cause then you wouldn’t be you.”

Holly swore her heart stopped beating. Then reality intruded. What was she doing? What was he doing?

Holly jerked back from his touch. Trying to cover the awkwardness, she tucked her hands in her back pockets. “Thanks for the advice.”

Her sudden movement seemed to snap Cash out of whatever spell he’d been under as well. With what was clearly a forced laugh, he stepped to the side, letting her pass. “Yeah.”