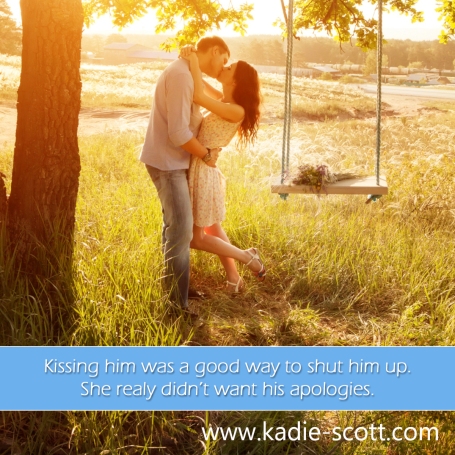 She walked to the door, and he followed, silent and brooding.

He opened the door and she followed him outside, where he turned abruptly to face her. “I’m so—”

She stopped him by going up on her tiptoes and placing her lips softly over his. Shock at her own behavior zipped through her, even as her lips tingled from the touch. She’d meant for the gesture to be comforting. Perhaps part of her realized that after she talked to him about Marcus tomorrow, she might not get another chance. Besides, it was a good way to shut him up. She didn’t want his apologies.

She savored the sensation of his warm lips under hers. Let her own linger against his for a long moment before she pulled back. “Don’t apologize. Please. I really do understand.”

Then, before he could say or do anything else, she went inside without a backward glance, locking the door behind her.

To interact with Kadie and other superfans and romance lovers, join the Awesome Nerds Facebook Fan Group!